Welcome back to the reality of unseen illnesses blog, thanks for reading. In my previous post I started discussing the journey of my invisible illness and how we came to the conclusion that I needed to go to hospital to get some clear answers. This is part two of that story.

Some parts I remember quite vividly and some parts are still very hazy but I shall try and do my best to explain everything to you. It was the day after Katrina’s 17th birthday, I was only 16 at the time and had been staying with my grandparents, they had a friend who was a doctor in neurology who suggested I come in for some tests at Monash Hospital, Clayton, Victoria. I remember being admitted in to emergency quite easily only because my grandfather entered emergency at the same time as me because he had hurt his back. They had already given him so many pain killers that he came round to check up on me and kept asking for my jello which was fine cause I didn’t want it anyway, yet still till this day he claims he never remembers this conversation, he must have been on some pretty powerful stuff.

I wasn’t in ED for very long, I saw a few doctors who saw how much pain I was in they gave me all kinds of medications, even severely strong medications and yet the pain wasn’t any better. They could see that I wasn’t able to walk, shower, eat, dress etc by myself so they soon decided to admit me and transfer me to the children’s ward. I remember travelling in a wheel chair to the lift, going up the lift and entering the children’s ward. The walls were painted yellow and purple , you could see the nurses station as you entered the floor and the starlight room was opposite. They wheeled me down a hallway past all the girls with the eating disorders and into a nice quiet room, with a computer opposite in the hallway that the kids used to study whilst in hospital. I got settled in for a few days, nurses and doctors kept coming in and out trying to do numerous amounts of tests. I don’t remember much as I was on a lot of medicine, which soon switched to IV medicine, it got so bad that morphine didn’t even help me, that they had to put me on a drip that was one thing lower than cannabis, they said to be careful because I could have hallucinated on that drug. I don’t remember seeing anything, but I do remember hallucinating a really bad smell. I only stayed in that room for about a week and then the nurses/doctors decided to transfer me to the other side of the hallway to a room with 3 ten year old’s. Now I had never been a very assertive person before then, I was always quite shy, hiding behind people, was polite and let people some what walk over me and a big part of my illness which I have now grown out of is that I disliked change. So when the nurses/ doctors decided to move me, I finally stood up for myself, not that it did me any good cause I still ended up in that room with the ten year old’s and in retrospect looking back now I probably behaved just as bad as a ten year old.

Once I was finally settled into this new room, I remember bits and pieces of different tests, I remember going up through the chain of doctors till I reached the head of Pain at Monash and the head of Neurology and within no time I had pretty much seen every doctor in that hospital and the whole hospital was taking about me. Some of the test that I had done were so painful, the main ones that still till this day stay stuck in my brain are the most brutal ones. The first one I remember quite clearly was when I got wheeled down to a tiny room where you lay on a bed and they first connect you up to some electrode stuff, then without anesthetic the doctor placed a needle or a rod into my leg and moved it around as if it were a gamer’s joy stick just to find if there was nerve damage. If it wasn’t there before I was certain there would be some after that procedure. I remember coming back from that procedure and I was crying and silent, I would not talk because it was one of the most painful things I had to endure. The second most painful procedure/ test that I remember having done was a Lumbar Puncture which is : The procedure of taking fluid from the spine in the lower back through a hollow needle, usually done for diagnostic purposes.

This was one of those unfortunate, unlucky things to happen to me, they had me lay up on a surgical metal type table, just casually left the door open for anyone to come in and see, did not give me any anesthetic before this procedure either and then decided that not 1, not 2, but 3 Interns would attempt to do this painful procedure before getting a head consultant to do it and to make things worse I had singing clown doctors in my face. Now I know the clown doctors were only there to try and help distract me but to someone who is in heaps of pain crying and then sees singing clowns in their face is a bit creepy. To make matters worse after the Lumbar Puncture, I then had to go back to a room full of Ten year old’s with a severe migraine, I wasn’t allowed to move and Nickelodeon had a sponge bob marathon running. Still till this day I hate sponge bob, it was so unbearable that I got up out of my bed and went and laid in the parents room. When I was finally able to return to my room I slept , but when I wasn’t asleep I still had this major headache even on strong pain killers, so the head of Pain came to see me and he said the best thing for it is “Caffeine” apparently caffeine helps migraines. So mum went and brought me some V’s, However because I had been on a cocktail of medicines and now every time a nurse entered my room she told me to chug V, I ended up throwing up so much brown vomit everywhere and have never ever drunk a V again.

I was at Monash for quite a few months, we even celebrated my sister Rachael’s birthday in the Hospital, my Friends from Drama had organised beautiful fake flowers with cute notes on them and my best friends Katrina, Rach and Sharna had organised a very special T-Shirt with drawings and lovely messages from all my friends in and out of school. I still have that shirt till this day and when ever I’m feeling down I just look at that shirt and remember there was a worse time and I will always be loved. 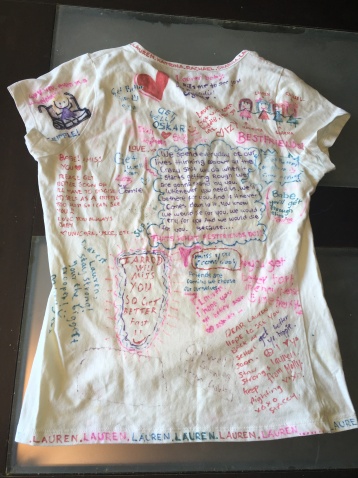 After a few months of mean physiotherapists, which then changed to a nicer one, harsh drugs, harsh tests and only minor results of finding minimal nerve damage in my legs, the team at Monash decided that I had now become a part of the “Too Hard Basket” ad I was sent to the “Stepping Stones” program, which was basically a mental health rehabilitation area for children and young adults. At this point in my life a major security blanket of mine was my mobile phone. It didn’t even have to be on or anything or even have a battery in it, I just wanted, but because of the no phone rule in the mental health department area they wouldn’t let me have it. I remember being wheeled through the halls, seeing the rooms, I was packed, I had clothes ready to stay and the hospital had even managed to give me a room by myself, but then a thought struck me, I AM NOT CRAZY!. I am not making this up and I do not believe I need to be in here. It was at that moment that I stopped feeling sorry for myself and decided I would get better by myself, so I Opted for out patient psychological help. This is when I truly changed, when I suddenly was able to be assertive and  stand up for myself, its funny you know because when speaking to out patient psychologists they actually said that if I had ever entered and stayed with the stepping stones program it wouldn’t have helped me, it would have actually made it worse.

In part 3 of The Process of My Invisible Illness to the final diagnosis: ACNE , I will discuss how I found the most amazing doctor who diagnosed me within less then 10 mins.

Thanks for reading, keep educating people on invisible illnesses.